I have been looking quite a bit at blackletter writing1 recently and I just randomly doodled around using Ayeri’s script, Tahano Hikamu, as a basis, today:

The letter 〈ba〉 is slightly difficult because it’s looking left whereas most of the other consonant characters are looking right. The difference between the placeholder consonant and 〈ra〉 is also very minimal, but that it is in the regular form (first rows) as well, plus similarity with 〈ta〉. I’m not perfectly happy with that 〈ha〉 either.

This is in continuation of an earlier post I wrote on trying to construct a pangram in Ayeri. I just played around with my dictionary a bit again tonight and came up with the following sentence:


‘So they shouted that the restaurant’s pig was quickly swallowed.’

This doesn’t make too much sense, but it’s grammatical (vaga ‘pig’ might better trigger neuter agreement on the verb, but whatever – let’s assume this is a boar), uses all consonant characters available in the Ayeri alphabet as well as the virama diacritic (‘gondaya’) only once, and no other diacritics are involved. Also, I didn’t have to make up new words specifically tailored to use up remaining consonants like last time: I admit, I had to make up daga ‘turtle’ in my previous article on pangrams for this purpose.

Or with an acute to indicate vowel length:

There is no ⟨я ё ю⟩ in the first vowel transcription scheme because that would lead to problems when the vowel is long, unless you’d accept spellings like ⟨яа ёо юу⟩. The second cyrillicization, using an acute to indicate length, consequently uses ⟨э⟩ for /e/ to keep ⟨e⟩ as /je/; ⟨ї⟩ is used to write /ji/. ⟨ъ⟩ was borrowed from Bulgarian, but Ayeri’s /ə/ is usually spelled as ⟨a⟩ or ⟨e⟩ respectively in Tahano Hikamu, so this isn’t mandatory. If need be, /jə/ could be spelled as ⟨ъ̈⟩.

The dot-below diacritic (with ⟨γ⟩ as dot-above) is non-standard, but seems like a reasonable addition. ⟨χ⟩ is used instead of a rough breathing because that suits Ayeri’s phonology better. Furthermore, ⟨ϊ⟩ and ⟨ϋ⟩ are used to distinguish the consonant from the vowel respectively – though the trema isn’t strictly necessary. Writing ⟨μπ⟩, ⟨ντ⟩ for /b/, /d/ as in Modern Greek – and, by extension, ⟨νκ⟩ for /ɡ/ – was considered too cumbersome. Again, when spelled in Tahano Hikamu, there is no distinct character used for /ə/ in Ayeri, so ⟨ε̣⟩ is not mandatory. The spelling of the vowels doesn’t fully conform to both Ancient and Modern Greek otherwise either.

Devanāgarī comes rather close to Ayeri’s own native script, since both are abugidas. A difficulty in this case is keeping /eː/ and /aɪ/ and /oː/ and /aʊ/ distinct. Hindi uses /ə/ as the inherent vowel, but for Ayeri, /a/ is more suitable. Hence, I decided to use ⟨ॅ⟩ for /ə/, although that isn’t strictly necessary for the reason outlined above: in Ayeri’s native spelling, ⟨a⟩ or ⟨e⟩ are used respectively. Using the dentals series for all dental and alveolar sounds was considered more straightforward than distinguishing the two by spelling /ta da/ as dentals and /na sa la/ as retroflexes. Virama is needed for clarity.

One day in December 2003, in the week just after the 1st Advent,1 the idea for a new conlang was born. An idea that turned out to stick with me for already 10 years now. You guess it: it’s Ayeri’s 10th birthday. Yay!

At that time, my 17 years old self was still fairly new to this whole making-up languages business, read things about linguistics here and there, and wasn’t shy to ask questions about terminology (and, looking at old mails, a little impertinently teenager-like so – sorry!), for example on CONLANG-L and the Zompist Bulletin Board. One thing seemed to catch my interest especially: syntactic alignments other than the NOM/ACC of the few languages I was familiar with, that is, German, English, and French. Apparently this curiosity was big enough for me to grow bored with my second conlang, Daléian (declared “quite complete” after maybe half a year of work or so), and to start something new from scratch in order to put newly acquired knowledge to test. I had read about “trigger languages” on CONLANG-L and wanted to try my hands on making my own. I can’t remember how long it took me to come up with a first draft of an Ayeri grammar, however, I do remember having been told that a good language can’t be made in a summer. Of course, I still didn’t really know what I was doing then, even though I thought I had understood things and authoritatively declared “this is how it works” in my first grammar draft when things sometimes really don’t work that way. But at least an interest had been whetted. Even now, after 10 summers and with more experience, I still come across aspects of my language that can use some work, clarification or correction, as the ‘blog’ page you can find on my website since March 2011 proves over and over again.

Just for fun, slight embarrassment and nostalgia, I went through some old backups contemporary with the very early days of Ayeri. Here is a sentence from the oldest existing document related to it, titled “Draft of & Ideas for my 3rd Conlang” – the file’s last-changed date is December 14, 2003, though I remember having started work on Ayeri in early December. I added glossing for convenience and according to what I could reconstruct from the notes. This uses vocabulary and grammatical markers just made up on the spot and for illustrative purposes; little of it actually managed to make it over into actual work on Ayeri:

According to the grammar draft of September 5, 2004, this would have already changed to:

Pinam ‘bed’ was only (re-)introduced on October 24, 2008. In the current state of Ayeri, I would translate the sentence as follows:

You can see, quite a bit of morphology got lost already early on, especially the overt part-of-speech marking (!) and animacy marking on nouns. Also, prepositions were just incorporated into a noun complex as suffixes apparently. Gender was originally only divided into animate and inanimate, but I changed that sometime because speaking European languages, it felt awkward to me not to be able to explicitly distinguish “he”, “she” and “it”. A feature that also got lost is the assignment of thematic vowels in personal pronouns to 3rd-person referents: originally, every 3rd-person referent newly introduced into discourse would be assigned one of /a e i o u/ to disambiguate, and there was even a morpheme to mark that the speaker wanted to dissolve the association. Constituent order was theoretically variable at first, but I preferred SVO/AVP because of familiarity with that. Later on, however, I settled on VSO/VAP. Also, I had no idea about “trigger morphology” for the longest time – I’m not saying that I know all about it now, just that I have a slightly better understanding … Orthography changed as well over the years, so 〈c〉 in the early examples encodes the /k/ sound, not /tʃ/ as it would today; diphthongs are spelled as 〈Vi〉 instead of modern 〈Vy〉. What was definitely beneficial for the development of Ayeri was the ever increasing amount of linguistics materials available online and my entering university (to study literature) in 2009, where I learnt how to do research and where I have a huge library available. Now I only wish I had the time to read all the interesting things I’ve downloaded and occasionally photocopied over the years.

One of the things people regularly compliment me on is my conlang’s script – note, however, that Tahano Hikamu was not the first one I came up with for Ayeri. Apparently, I had already been fascinated with the look of Javanese/Balinese writing early on; this file is dated February 9, 2004:

However, since the letter shapes in this looked so confusingly alike that I could never memorize them, I came up with this about a year later:

What is titled “Another Experimental Script” here is what would later turn into Tahano Hikamu, Ayeri’s ‘native’ script. According to the notes in my conlang ring binder, the script looked much the same as today about a year from then, but things have only been mostly stable since about 2008.

So what’s on for the next 10 years? For one, I’m still kind of embarrassed that I haven’t managed to provide a full-fledged reference grammar in all those years – what you can currently download from my website has been left unfinished for about 3 years now, since working on that grammar always becomes tedious again after newly found enthusiasm typically ebbs after a few weeks. Also, I have long meant to figure out either a proto language for Ayeri, or maybe daughter languages or dialects. However, I don’t really have any schedule or agenda, so I’ll continue to tinker on whichever aspect of Ayeri seems right at the time.

This comment about Ayeri on IRC some weeks ago made me chuckle: 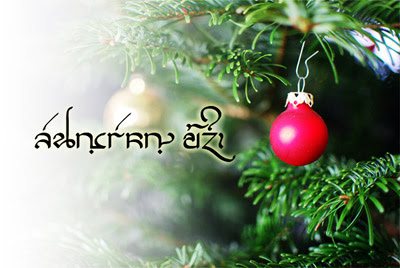 To those that it applies to 🙂

This article still gets linked a lot even after over 5 years since publishing it. Technology, however, continuously advances, so please be aware that the information below may be outdated.

One of my ongoing language-construction related pet projects is to bring my constructed language’s writing system to the computer. I have been trying to come up with workable solutions to do this for a number of years, but always hit brick walls sooner or later. END_OF_DOCUMENT_TOKEN_TO_BE_REPLACED

For some time now I’ve played around with a style for Ayeri’s native writing system Tahano Hikamu that I loosely based on the look of the Javanese script (which I’ve already mentioned in a previous posting). I made several examples before using an experimental font, but the style has not been documented anywhere so far. However, the file is up now as a kind of brochure/leaflet/thing intended to be a supplement to the “Alphabet” page. That is, I spared me the work to repeat myself with explanations, so most of the file’s content is really just a table of the different characters with their names underneath.

For those who are curious: The outlines of the characters were drawn in Illustrator, the brochure was made in InDesign, the stock photos are from the wonderful stock.xchng. This all also explains the file size, by the way.

Note that I’ve also put up information for the Daléian script again. I just printed out the relevant page from my old website as a PDF file. The low resolution of the images is suboptimal for this purpose, but I suppose it’s still good enough to read on screen and get an idea.